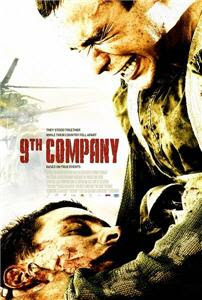 “9th Company” is a Russian movie released in 2005. It was “inspired” by events surrounding the defense of Hill 3234 in Afghanistan by 9th Company, 345th Guards Airborne Regiment in January, 1988. The movie was a big hit in Russia because it emphasized the heroic sacrifices made by Russian grunts in a forgotten war. The film won the Russian equivalent of the Best Picture Oscar. It could be described as Russia’s answer to “Platoon” and “Full Metal Jacket” with a dash of “Hamburger Hill” thrown in.

The movie introduces us to a typical war movie squad which is heterogeneous including the sensitive artist and the psycho. They bond during boot camp which is similar to the cinematic American boot camp. The drill sergeant is mean and takes the approach that they are not human, they are s***, but he will make them into men. They go through the usual obstacle course (one even crushes his nuts on a beam ala “Stripes”), crawling under wire, bayonet drill, and the rifle range. There is no fat guy that everybody hates, but there is a sensitive guy who almost quits. The movie does a good job showing how soldiers bond. It may be cliché, but it’s realistic. The soldier talk rings true because no matter the nationality, soldiers talk about the same things.

Before being shipped off to Afghanistan, they are lectured briefly on the conditions there. Muslims have different views on life and death, you are safe in the villages because of the rules of hospitality, and oh, by the way, no one has ever conquered Afghanistan. See ya!


They arrive at Bagram Airfield in Afghanistan 153 days after induction. When they arrive, a departing veteran gives one of them his lucky amulet. Sucks for the other people on the plane because you can guess what happens next. Cliches cross borders, apparently.

When they arrive at their outpost, their sergeant is like a clone of the boot camp DI. He beats up a soldier who falls asleep on guard duty. The men are “savages”, but of course our boys will not end up like them. The Afghani army are called “greenies” and remind you of the ARVN (our equally dependable allies in Vietnam). The mujahideen are called “muj” and remind you of the Viet Cong. In an interesting scene, they catch the local muj leader (who they actually respect as a fellow warrior) and as he is backing away he trips and one of them kills him. (I keep saying “one of them” because to tell the truth, it is hard to distinguish the characters.)

The movie has several pyrotechnical, balls to the wall, combat scenes. One is a convoy ambush where much ammunition is expended. The squad chases the muj who disappear into tunnels (ala the Viet Cong). They follow underground into the village where one of them is killed by an innocent-looking child (like Vietnam). Rockets destroy the village (like Vietnam).

The big set piece is the siege of the hill. They are choppered in to set up a position on a hill overlooking a road that the Soviet high command is determined to open up to friendly traffic. The mujahideen attacks in waves. There are lots of graphic hand-to-hand combat and shocking deaths. If you watch the movie with someone else, bet before hand on how many of our boys will survive. (Tip: do not bet that all of them will live happily ever after.) The testosterone level is very high. Americans will doubly enjoy this scene because we can enjoy all the killings! (Sorry, I forgot we are friends with the Russians now.) The movie ends with them winning, but abandoning the hill (ala “Hamburger Hill”) and being forgotten by the Russian public.

This is an excellent war movie for certain guys. You know who you are. Unfortunately, the core audience for this type of film usually does not like to read, so the subtitling creates a dilemma. As a war movie aficionado, it is fun to see the elements that harken back to beloved Vietnam War movies. You get three for the price of one with this movie:

Hamburger Hill – victory thrown away / who will survive?

As far as accuracy, the movie gets a B. There was a battle on a Hill 3234 and the strategic situation was as the movie implies. The enemy did make 12 human wave attacks (possibly under the influence of drugs). All of them were repulsed. Contrary to the movie, the unit was consistently resupplied and medevaced. Also, the movie (surprise!) amps up the casualties. It was bad enough in reality with 34 of the 39 either killed or wounded. The hill was abandoned after the battle. By the way, there apparently was a Snow White who “entertained” the troops before they left boot camp.

The acting is okay. It is hard to follow who is who. (Maybe Russians say the same about “Platoon”.) The combat is intense, but kind of Hollywoodish. The soldier life is realistically portrayed which supports my theory that all soldiers are basically the same, no matter the nationality.

Will it crack the 100 Best War Movies of All Time? Possibly. For now, watch it as a companion to “Charlie Wilson’s War” and “Restrepo” and you will understand the wars in Afghanistan better. Then e-mail your Congressman and urge him to do the same.