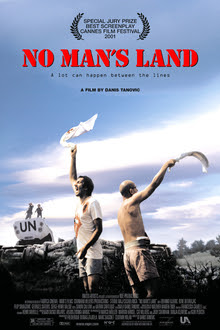 “No Man’s Land” is a Bosnian war movie set in the Bosnian War. Most Americans are not familiar with this terrible war that broke out after the break-up of Yugoslavia. The confict, which raged from 1992-1995, is complicated. Basically, it was a war between the Bosnian Muslims of the newly created Bosnia-Herzegovina and the Bosnian Serbs who were supported by the country of Serbia which had desires for territory in Bosnia. Anyway, before your head starts spinning – you do not need to understand the conflict to enjoy the movie. The story is a universal one of enemies thrust together and forced to coexist. It could have taken place in any war (in movies anyway).

The movie opens with a squad of Bosniaks (Bosnian Muslims) getting caught in a fog and wandering close to Serbian lines. They are wiped out in a sudden and graphic rain of violence. One (Ciki) survives, but he is stuck in a trench in no man’s land. The Serbs send out two men to check on the situation. The Bosniak hides in a dugout and kills one of them and wounds the other (Nino). They argue over who is to blame for the war. It is a war that featured ethnic cleansing, mass rapes, and even genocide. Of course, it’s the other side that is evil.
To make matters more interesting, a companion of Ciki suddenly awakens from the dead. The problem is that Nino’s partner had placed a Bouncing Betty mine under his body earlier as a booby trap and now he cannot move without disastrous results. Ciki and Nino make an uneasy truce. They manage to signal both lines and the U.N. peacekeeping force (called “smurfs” because of their blue helmets) is called in. Before Lt. Marchand and his comrade can rescue the men, they are given an order by the U.N. commander to withdraw immediately. Nino is going to go with Marchand, but Ciki shoots him in the leg to keep him in the trench as insurance against a Serbian attack.
At this point, the international press in the form of an intrepid female reporter (Jane Livingston) sniffs out the story. She intimidates the U.N. commander into allowing Marchand to go back with her in tow (and the rest of the press – so much for her exclusive!). In a nice and necessary touch, a news report chronicles the war up to this point (an important tutorial for the ignorant American audience). Fearing adverse press coverage, the U.N. now decides to save the men including sending in a bomb disposal expert. They arrive just in time to save Ciki from being knifed by Nino.

The bomb guy is appropriately sweating and in a tense scene (with no music), he discovers that the bomb cannot be defused. I won’t give away the rest.

“No Man’s Land” is highly acclaimed. It won the Best Foreign Film Oscar in an upset over the popular “Amelie”. It won a total of 42 international awards. The set (the trench) is realistic. The situation is believable, if a bit contrived. It is full of surprises. In a normal movie, the bomb would be defused. The rapprochement between Ciki and Nino would bear fruit.

Did you guess the movie is anti-war? It is also instructive of how horrible most civil wars are. It takes some legitimate swipes at the press, stressing its desire for sensational stories. The indictment of the U.N. high command is a bit cliché. We’ve seen corrupt, Machiavellian officers in plenty of movies.

“No Man’s Land” is a bit overrated (possibly out of sympathy for the Bosnians), but still well worth the viewing. Watch it for the interesting dilemma it revolves around and watch it so you won’t feel so guilty about sleeping through a war that killed at least 200,000 people and featured many atrocities.