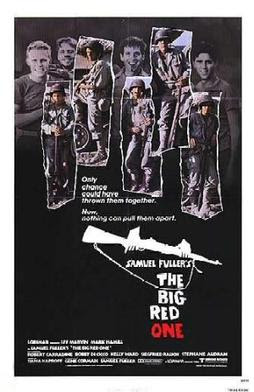 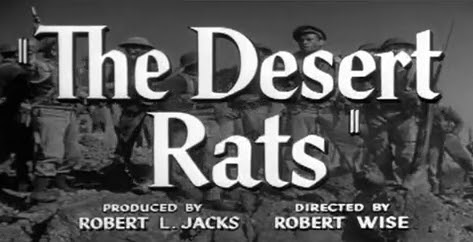 “The Big Red One” is essentially a five actor movie. Lee Marvin plays a grizzled sergeant (he was 56 years old at the time) in charge of a squad that consists of four guys who can not be killed (or even wounded) and a series of cannon fodder replacements. Marvin is very good, as usual. He has the weary father-figure down pat. Unfortunately, he completely dominates the other four who range from barely registering (Kelly Ward as Johnson) to inconsistent (Robert Carradine as Zab ) to semi-charismatic (Bobby Di Cicco as Vinci) and earnestly bad (Mark Hammill as Griff).

“The Desert Rats” is a Richard Burton movie. He plays British Capt. MacRoberts who given the task of cracking the whip on an undisciplined Australian unit. Burton is above this kind of material but he is game and takes the role seriously. The only other actor that makes an impression is Robert Newton as MacRoberts ex-scholmaster Bartlett. Newton plays a cowardly drunkard who refuses to run because it would be dishonorable. It is a poignantly effective performance. James Mason makes a welcome appearance as Rommel to (A) showcase an exchange between Mason and Burton (well done) and to (B) scuff up his portrayal from “The Desert Fox” (this Rommel is less likeable).

“The Big Red One” is a small unit (very small unit) movie. The squad (actually 1/3 of a squad) is heterogeneous. Johnson is a farm boy, Vinci is the wise-cracking Italian-American, Zab is the budding writer from Brooklyn, and Griff is the sharpshooter who can’t kill. The group is led by a hero (the Sarge), but they are not moving forward to accomplish a particular objective. There is a chronicler in the form of the narrator Zab (who represents Samuel Fuller). The movie does not alternate between opposites like action and rest, instead it is a series of vignettes. There is a redemption figure in Griff, but that subplot is surprisingly incomplete. There is no conflict within the group or over command. In conclusion, other than the stock characters the film avoids clichés.

“The Desert Rats” has some familiar characters and situations. There are two redemption arcs: Carstairs who is almost court-martialed by MacRoberts and Bartlett. Both resolutions are predictable. MacNamara is the stock character who builds a unit using tough love which at first causes resentment but eventually results in respect. The unit is not clichely heterogeneous because few characters are developed. MacNamara is the hero and leader, but the role is not really forced upon him. The movie alternates combat with exposition.

The plot of BR1 can best be described as: a small squad led by an old sergeant go from Operation Torch to the end of the war while experiencing a series of incidents. The vignettes range from interesting (the liberation of the death camp) to bizarre (the insane asylum) to ridiculous (the ambush at the crucifix). It’s like Samuel Fuller kept a notebook of ideas for war movie scenes and then made a movie that included all of those ideas, good and bad. The scenes could have been put in any order. The movie is entertaining, but several of the mini-stories are painful for an intelligent war movie fan to watch. It’s one of those movies that tends to fall apart upon repeat viewing, but kudos for being different.

The plot of TDR is much more standard. It flows from green, undisciplined unit being broken and trained by a tough leader to become confident, disciplined veterans led by a more understanding leader. Throw in combat sequences to prove the evolution and to add action. Nothing you haven’t seen before, but well done and not hackneyed. Very predictable, however.

BR1 has surprisingly little combat for such a long movie (I watched the extended version) and the scale is small because of budget constraints. You get the impression this squad is fighting the war by itself. Most of the scenes are the “guns and grenades” variety. When the movie moves into a combat sequence it is usually PG intense, but brief. Compare it to “Cross of Iron” that was made three years earlier and you can see that Fuller was still clinging to Old School combat. There is a fire-fight for the Torch landing, an extended attack on an African town that features a French cavalry charge (WTF) and the smallest tank in war movie history, the D-Day landing featuring a Bangalore Torpedo relay, the ambush at the crucifix, the insane asylum shoot-out, and the liberation of the death camp. Each is fairly intense, but most are too brief. The tactics and weaponry are fine.

TDR has only two battle set pieces, but they are both excellent. The first is defense against a German Panzer attack during a sand-storm. The artillery barrage is realistic (the movie has great sound and explosion effects). The deaths are reasonable. There is a cool duel between a German tank and an anti-tank gun. The other action sequence involves a commando raid on a German munitions dump. A “guns and grenades” at night spectacle. Both scenes are better than anything in BR1, but BR1 puts the unit in combat more frequently.

BR1 was directed by Samuel Fuller. It is semi-autobiographical as Fuller served in the 1st Division and participated in Operations Torch, Husky, and Overlord. His unit fought through France, Belgium, and Czechoslovakia. He was involved in the liberation of the Falkenau concentration camp. He was awarded the Bronze Star, Silver Star, and Purple Heart. He went on to a legendary career as a filmmaker. He was noted for gritty B-movies which he made with low budgets. These included “Steel Helmet”, “Fixed Bayonets!”, and “Merrill’s Marauders”. “The Big Red One” has many of the attributes of a B-movie even though it was by far his biggest film.

TDR was directed by Robert Wise. Wise was a much more mainstream director than Fuller. He was also much more highly acclaimed. He won two Best Director Oscars. His other war movies were “Run Silent, Run Deep” and “The Sand Pebbles” (for which he was nominated for Best Director).

This was a shocker. BR1 has a strong reputation among critics and war movie fans and TDR has been largely forgotten. But the tournament is all about the match-ups. Plot and combat did not play to BR1’s strengths and TDR had just enough talent to take the match to overtime. In the end, Samuel Fuller pulls his movie through to the second round.
Posted by War Movie Buff at 8:55 AM