On the eleventh day of Christmas, my true love gave to me – eleven gyrenes a reconning 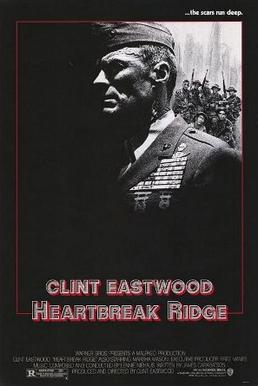 “Heartbreak Ridge” is named after an actual battle in the Korean War, but it has nothing to do with that battle, unfortunately.  It was released in 1986 and was directed and produced by Clint Eastwood.  Part of it was filmed on the island of Grenada.  Eastwood got limited Pentagon support due to the fact that the main character drank, was divorced, had a potty mouth, and used unorthodox training methods.  The Marine Corps disowned the film because of the language.  The movie was nominated for an Oscar for Sound (I’m assuming that was not for the sound of the words coming out of the men’s mouths).  It was a big hit and critics were kind.


We meet Gunny Highway (Eastwood) in a jail cell telling war stories.  He’s a warrior without a war.  He soon meets Stitch Jones (Mario Peebles) who is a lover who is not interested in war.  Surprise, he is in the platoon that Highway has been assigned to shape up.  The heterogeneous unit (black playa, two Hispanics, Italian paisano, hick, he-man, etc.) is in need of discipline and motivation.  They remind of the men in “Stripes”, except this movie is not supposed to be a comedy.  (Shockingly, “Stripes” came out five years earlier and thus is not the parody of this movie that you would assume.)   Highway’s commanding officer Maj. Powers (Everett McGill) takes an instant dislike to Highway (completely disregarding the fact that the gunny is a Medal of Honor recipient).  Powers is an ambitious asshole Annapolis grad who considers Highway to be a dinosaur.  “This is the new Marine Corps and you are an anachronism – old timer.”  Theme established:  old versus new, veteran versus greenie-weinie.


Highway puts the platoon through some tough physical training.  There is a running gag that involves Highway forcing the men to work out shirtless.  Hilarious (not) and WTF.  What do these men do in training?  Rappelling, obstacle course, live fire, and the shooting range.  Highway handles the mutiny of his wussies by beating he-man.  R-E-S-P-E-C-T is inevitable.  Meanwhile, Highway is trying to rekindle with his wife Aggie (Marsha Mason).  It’s a rocky road but you don’t need a map to tell where it’s going.


Highway continues to butt heads with Powers who uses the Recon Platoon to make his platoon look elite.  This leads to a melee between the two units culminating in a tie-breaker bout between Highway and Powers.  Bonding complete, now all they need is a war to consummate.


The Recon Platoon is sent to Grenada to liberate the Medical School.  On the way they use a bulldozer to take a bridge.  Later, they have a “last stand” against the vaunted Cuban army.  One guy has to die so the movie can claim realism.  (This is the kind of movie where even one death in the unit is a surprise.)  They use a phone and credit card to call in air support.  Powers calls Highway’s pushing forward disobedience.  Highway calls it initiative.  What will the general call it?  The men return to an anti-Vietnam War welcome.  Guess who’s waiting for Highway?


Have you ever re-watched a movie that you were not impressed with as a teenager and found you were wrong about it?  This is not one of those times.  I invariably find that my first impressions are correct in cases like this.  If I did not like a war movie when I was a naïve teenager, it’s unlikely to gain respect now that I analyze them critically.  “Heartbreak Ridge” is a terrible movie.  Even Grenada deserved better.  The acting is poor, other than Eastwood, and even he is not at the top of his game.  He sways between gruffly  growling and petulantly pining.  Peebles is aggravating as the rocker wannabe and Powers needs a mustache to twirl.  The ensemble mugs its way through the film.  Speaking of which, in the combat scenes they look like actors playing soldier.  There obviously was no boot camp for this group.  Maybe that’s why there is a lack of action in the movie.  You sit through almost two hours just to get to Grenada, for Christ’s sake.


The dialogue is a weakness.  Although the screenplay was by a Vietnam veteran, the words he puts in the soldiers’ mouths do not ring true.  Many of the lines are smack talk aimed at fourteen year old boys.  A good drinking game would be to take a drink every time you feel the urge to say “oh, snap!”  The writer appears to have bought a copy of “101 Great Military Insults” and attempted to cram all of them into the script.  Here are a few of my favorite lines:


Highway:  “I eat concertina wire and piss napalm and I can put a round in a flea’s ass at 200 meters.”

Choozoo:  “If your brain was half as smart as your mouth, skunk stool, you’d be a frickin’ twenty star general by now.”
Highway:  “You pump the neighbor’s dog again, Jakes?   Or are you always slack-jawed and silly in the afternoon?”
Highway:  “Why don't I bend you over the table there... send you home with the "I just pumped the neighbor's cat" look on your face.”
Highway:  “If you pull another shithead stunt like that again, the only thing that'll beat you to the brig is the headlights on the ambulance you'll be riding in.


And by the way, much of the dialogue is homophobic in a cringe-inducing way.  Highway nicknames the Italian “Fag –eddi”.  There’s a lot of high school locker room humor in the film.


The movie is full of clichés.  The warrior who is out of place in peacetime.  The clash of generations.  Molding recalcitrant charges into a lean mean fighting machine.  The incompetent glory-hound standing in the way of the pure warrior.  Military life trumps home life.


Surprisingly, the movie is fairly accurate for a film that makes no claim to be based on a true story.  There was a Heartbreak Ridge which was a typical Korean War hill assault with frontal tactics that resulted in high casualties and the acquisition of some worthless real estate after attacks and counterattacks by stubborn commanders.  Similar to Pork Chop Hill.  Three real incidents from Grenada are portrayed in the movie.  The use of the bulldozer was based on an action taken by future head of Central Command, Capt. John Abizaid.  The Medical School was liberated as depicted, but by Army Rangers.  The phone call for air support was a famous anecdote from the conflict and was the incident that inspired the screenwriter to develop the script.