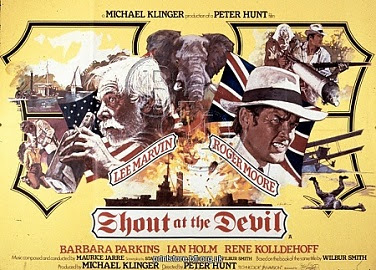 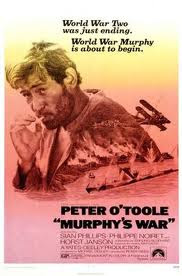 ﻿
In the 1970s a pair of action movies came out that dealt with obsessions to destroy a German warship.  One is set in WWI Africa and the other is set in WWII South America.  Both are buddy films.
“Shout at the Devil” was released in 1976 and is a typical 1970s action/adventure with comedy infused to match the tastes of that decade.  It’s a British film directed by Peter R. Hunt.  It purports to be based on a remarkable true story.  It is set in Zanzibar in 1913.  It’s basically a buddy film starring Lee Marvin and Roger Moore.
A British nobleman named Sebastian Oldsmith (Moore) meets up with a hard-drinking American named Flynn O’Flynn (Marvin) in tropical Africa.  Their relationship starts off rocky as O’Flynn steals all of Sebastian’s money.  O’Flynn is an ivory poacher who is on the outs with the local German forces led by a commander named Fleischer.  When O’Flynn is ambushed by the Germans, Sebastian rescues him from a crocodile.  Yes, it’s that kind of movie.  Later, O’Flynn’s boat is rammed by a German warship named the Blucher.  The two buddies wash ashore and eventually reach O’Flynn’s daughter’s home.  Rosa (Barbara Parkins) nurses the malaria-suffering Sebastian back to health and they fall in love.  Naturally, O’Flynn is opposed to the relationship and a comical fistfight ensues.  O’Flynn is often drunk in the movie and one has to wonder if Marvin was “acting” drunk.  He is unable to prevent the marriage and subsequently the Oldsmiths have a child. 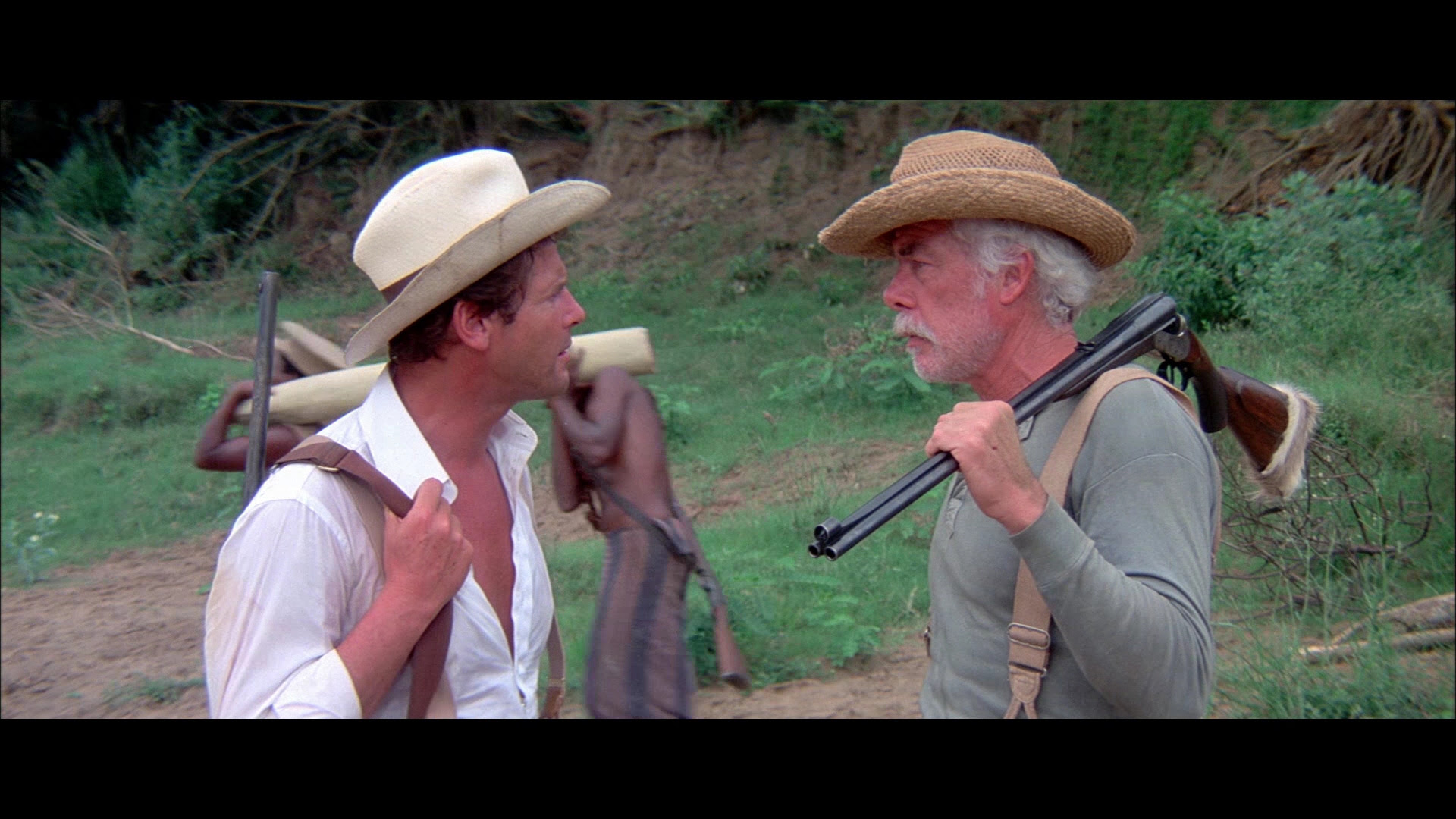 Sebastian and Flynn discussing the
white man's burden
After raiding Fleischer’s camp, the German retaliates by burning O’Flynn’s home while the men are away.  The Germans kill the baby, but strangely leave Rosa alive and vengeful.  The trio decide to aid the British Admiralty by sinking the Blucher.  They hatch a plan to blow up the ship, but complications arise.  The movie builds to a rousing finale.
“Shout at the Devil” is all over the place.  It has action, violence, romance, humor, fistfights, explosions, villains, etc.  Unfortunately, none of these elements are special and the blend is uneven.  The movie does not know what it wants to be.  The first half is a farce, then the baby gets killed and it becomes a revenge flick.  Neither half is strong.  The whole movie has a large amount of silliness, mostly in the form of Marvin chewing the scenery (the movie does have some awesome scenery, by the way).  I am a big Lee Marvin fan, but he looks like he did not take the production seriously.  You will enjoy the movie more if you do like Marvin apparently did, drink heavily during it.
As far as the claim that it is based on a true story, you better take that with a grain of salt.  There was a Battle of Rufiji Delta in which a German light cruiser the SMD Konigsberg was blockaded and then sunk by two British monitors.  This does not sound anything like what happens in the movie.
“Murphy’s War” is a Peter Yates film (his only war movie) and was released in 1971.  It was set and filmed in Venezuela on the Orinoco River.  It stars Peter O’Toole  (three years after “The Lion in Winter”).  Murphy was a crewman on a British freighter that is sunk on the river by a German u-boat (actually an American sub sold to the Venezuelan Navy).  He was the sole survivor as the Germans machine-gunned the crew.  He recovers at a nearby missionary settlement where he makes the acquaintance of a female Quaker doctor named Hayden (Sien Phillips - O’Toole’s then wife).  The pilot of a floatplane that had been shot down by the sub washes ashore and is murdered by the u-boat captain when his men raid the settlement.  Murphy vows revenge with the help of a handy man named Louis (Phillippe Noiret).  They recover the plane and Murphy learns to fly it.  His plan is to drop some rather large Molotov cocktails on the sub.
“Murphy’s War” is well made.  The cinematography is showy.  The opening scene of the sinking of the ship is very busy with quick cuts and some distorted POV from Murphy’s perspective (O’Toole did his own stunts amidst the burning oil, explosions, and machine gun bullets).  The scene is quite effective in establishing that the Nazis are evil and deserve vengeance.  Another bravura scene is the one where Murphy learns to fly the plane.  I doubt he did the stunt flying because it is pretty hairy.  It is an extended scene which is typical of a movie that takes its time getting where it’s going.  It is also typical of the implausible nature of much of what happens in the plot.  Cinematic baubles can only partly mask the lack of reality evidenced in the movie.  To advance the obsessive revenge angle (and to get the movie to feature length), the film has several plot developments that defy logic.  Starting with what the hell is a u-boat doing up a South American river in the last weeks of WWI?  So turn your logic off and enjoy.  There are some entertaining action sequences that will leave war movie fans smiling (and shaking their heads).  Accuracy is not a factor as it is obviously not based on a true story.  In order to add the irony that the war is nearing an end and yet both the u-boat captain and Murphy are pursuing hostilities with avengeance, the movie has a u-boat operating in Venezuela.  This would have been extremely unlikely since the u-boat fleet had been pulled back long before April, 1945.

O’Toole has a fun time and reminds of Marvin (partly because I would not be surprised if his performance was not alcohol-enhanced as well).  An interesting dimension to his character is there is an allusion to his having been a poor crewman so his motivation is a bit puzzling.  His wife is the rare strong female character in a war movie.  She is not in the movie to be a bimbo.  She represents sanity and refers to the charming Murphy as a “mindless bastard”.  Noiret is appealing as Murphy’s Sancho Panza.  The Germans are bland and the captain is straight out of central casting – handsome, blond, and malevolent.  (He reminded me of the u-boat captain from “The McKenzie Break”.)  The reason to see the movie is not for the acting, it's for the three attempts on the sub.  Each is as delirious as Murphy himself.
Which is the better movie?  Clearly “Murphy’s War”.   Sometimes one star is better than two.
Shout at the Devil  =  D+
Murphy’s War  =  B-
Posted by War Movie Buff at 11:59 AM