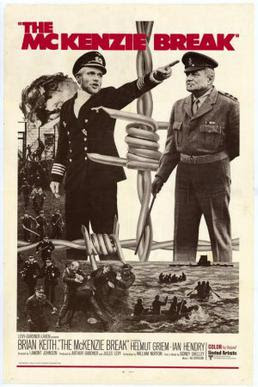 “The McKenzie Break” is a prisoner of war movie released in 1970.  It was directed by Lamont Johnson (“The Execution of Private Slovik”) and was based on the novel The Bowmanville Break by Sidney Shelley.  It tells the story of an attempted prison escape by Germans  who hope to hook up with a u-boat.
The movie is set in Camp McKenzie in Scotland during WWII.  There is a discipline problem in the camp as the Nazis are rebellious and the British commandant does not have complete control over the camp.  The Germans are led by a charismatic u-boat captain named  Schluter (Helmut Griem).  Captain Jack Conner (Brian Keith) is brought in to restore control.  He is a loose cannon who has been spared court-martial to do the job.
The Germans are divided into two factions.  The Luftwaffe personnel want to chill, but the Reichsmariners are hard core.  Schuler accuses two of the non-rebels of being gay.  That was unusual for a 1970 film.  The submariners are at work on a tunnel similar to the one in “The Great Escape”.  The dirt is disposed in the attics.
Schuler stages an insurrection which results in Conner sending in the fire brigade.  A big brawl breaks out and two Germans disguised as British are able to blend in with the British.  They will make contact with a u-boat that will pick up the escapers.  One of the Germans accused of being gay is badly beaten by his mates and is taken to the infirmary.  While there he is killed by Nazis who make it look like a suicide.  Before he dies, he tells Conner that there will be an escape attempt.  Conner decides to let the escape go on to bait a trap for them.
The tunnel exit is under the guard house.  (Well, that is unique!)  Schuler purposely collapses the ceiling with the dirt as a diversion.  28 submariners escape and hook up with a truck.  Conner is tracking them by plane.  When they reach the beach,  Schuler’s second in command decides that instead of camouflaging the truck, he drives it into  huge hole resulting in an explosion and smoke that attracts Conner’s attention.  Ridiculous!  Conner decides the smoke is nothing.  Doubly ridiculous!!
Will they escape?  See spoiler below.
“The McKenzie Break” is in the middle tier of POW films.  It is moderately entertaining.  Keith is his usual dependable self and Griem makes a good asshole Nazi.  The movie makes use of the strong personalities clashing theme.  Both men are full of hubris and neither is likeable.  Another theme is how far should you go to continue fighting once you are captured.  (Something explored in the similar “Hart’s War”).   Some of the cinematography is interesting.  Fades are used to blend some scenes.  There is some good tunnel escaping music.  However, the movie has a made-for-TV feel to it.  The plot does have some unpredictability to it.  This includes the ending which unfortunately is weak and unsatisfactory.   Speaking of which.
THE ENDING
The u-boat (which was obviously not a u-boat) surfaces and the escapees paddle out to it.  Conner spots the sub from his plane and calls in a motor torpedo boat.   Conner buzzes Schuler’s boat prevent it from reaching the u-boat before it crash dives.  Conner and Schuler stare at each other.  One is going back to incarceration and the other better be heading for that court-martial.
HISTORICAL ACCURACY
Surprisingly, the plot is based on an actual incident.  It happened at a camp in Bowmanville, Ontario in Canada.  An audacious plan was hatched to get four u-boat captains out and back to sinking Allied shipping.  The leader of the group was the famous u-boat ace Otto Kretschmer (who Schuler must have been based on).  Kretschmer did lead a rebellion to protest prisoners being shackled.  The Germans called the escape plan  Operation Kiebitz.  The prisoners contacted the Reichsmarine via coded letters through the Red Cross.  Unfortunately for this cool idea, the Canadians broke the code and knew the basics of the plan which was to break out via a tunnel, make the 870 mile trek to the Atlantic coast, and link up with a u-boat.  The Canadian counterplot was called Operation Pointe Maisonnette (named after the destination of the escapees).  The Canadian plan was to allow the escape and then catch the submariners in the act of escaping and capture the sub at the rendezvous.  The tunnel was basically as depicted in the movie and dirt was stored in the attic.  However, the ceiling collapse was not intentional.  The Canadians pretended to not notice it.  The escape was choked off as soon as it began, but one prisoner managed to use a zip line to get over the wire.  Wolfgang Heyda was actually able to reach the pick-up site but was arrested there.  The u-boat surfaced but the captain was suspicious and soon dove.  The U-536 survived a depth charging from the waiting task force and escaped.
GRADE  =  C
Posted by War Movie Buff at 8:15 AM