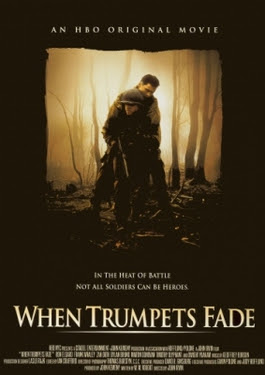 ‘’When Trumpets Fade” is the best movie ever made about the Battle of Hurtgen Forest.  It is also the only movie about the battle.  Anyone familiar with the battle knows it will be bleak if realistic.  That was one fucked up battle.  It is the type of movie that could not have been made before its time.  It is one of the best examples of what I call the VioLingo School of modern war movies.  Vio refers to realistic violence and Lingo refers to realistic soldier life and language.  This school also often features an anti-hero.  “When Trumpets Fade” has one of the most memorable.  The film was directed by John Irvin (“Hamburger Hill”) for HBO.  This was before HBO became the creative force that it is today.  The film was a preview of great things to come.


The movie opens very strongly with Pvt. Manning (Ron Eldard) carrying a buddy through a burned out landscape on his back.  The mortally wounded soldier begs to be put out of his misery and Manning complies.  Manning is an odd mixture of Audie Murphy  and John Yossarian (“Catch-22”).  He may be a bit anachronistic because he realizes he is suffering from PTSD and is not ashamed to admit it.  When he tries to get a Section 8 (mentally unfit due to combat stress), Capt. Pritchett’s (Martin Donovan) counter offer is to promote him to squad leader and hand him replacements.  One of them is a fat guy with glasses named Sanderson (Zac Orth) who in a typical war movie is the deadest of meat.


On their first patrol, through a foggy forest, Manning puts Sanderson on point seemingly to get the cliché accomplished as fast as Gardner in “Platoon”.  Sanderson gets separated from the squad, but does encounter the face of Nazism in the form of a German sergeant.  Manning, ever the self-preservationist, leaves Sandy behind.  Sandy (having never seen a war movie) does the WTF move of surviving.


The big picture is the Americans have to take a bridge crossing “at all costs”.  The big push starts with the cannon fodder gingerly moving through the mine-laden forest until…  Plus the German artillery opens fire.  Tree bursts.  Graphic wounds.  Decapitations.  Chaos.  There are now some openings in command.  Manning keeps getting promoted in spite of himself.  You’ve heard of the Peter Principle, I suggest the Manning Principle defined as “being promoted despite not wanting it”.  Manning is promised his Section 8 if he takes out a battery of 88s.  When one of his charges panics and it catches, Manning shoots him. This is the right thing to do, but only adds to his reputation of being a dick.  Sandy goes all flame-thrower on the battery - mission accomplished.  Unfortunately, Pritchett has snapped due to a hellacious river crossing assault, so no deal.  In fact, how about another promotion?


Manning has fought the system unsuccessfully and now it’s time to play the game.  He assembles a crack trio that includes Sanderson and the fighting medic Chamberlain (Frank Whaley).  The idea is to eliminate some German tanks so the next brainless frontal assault on the river crossing will succeed.  Better to die on a suicide mission.  Who will be the “Lone Survivor”?


“When Trumpets Fade” is a great movie and yet relatively unknown.  It got lost in the tumult over “Saving Private Ryan” and “The Thin Red Line”.  While not as good as SPR, it is definitely superior to TRL.  Factor in the low budget and the film is amazing.  There are few war films that are this sincerely anti-war and anti-authority.

﻿﻿﻿
The acting is outstanding with Eldard the quintessential anti-hero.  He could be the poster boy for the archetype.  He is dislikable and does not care.  Manning is in my top five all-time war characters.  Eldard does his best work as does Orth.  The supporting cast is eclectic and includes Dwight Yoakam as the loathsome Lt. Col. Rickman.  You know what kind of film it is when Manning’s buddy at the beginning is played by Jeffrey Donovan.  We also get Timothy Olyphant and Frank Whaley.  The film is the anti-all-star epic.  (I’m looking at you “Thin Red Line”.)  The cinematography is noteworthy with a blend of hand-held, low angle, and plenty of close-ups.  The colors are muted to fit the mood.  The action is much better than most war movies.  The film is violent, gritty, and graphic.  This is very much a guy movie (although I know at least one discerning female who loves it).  The soldier talk and behavior are authentic.  The men are scared, not confident, and clueless.  The movie admirably and surprisingly avoids clichés.  It is not really a small unit movie as the men aside from Manning and Sanderson are not developed much.  It sets up nodding expectations and then does not go there.  The only thing predictable is it will not have a happy ending.  The tactics are realistic for small units in WWII Europe.  The tactical decisions reflect the unfortunate lack of creativity that made the Battle of Hurtgen Forest such a tragedy.


As far as accuracy, the movie is dedicated to the American soldiers who went through the meat grinder of the Hurtgen Forest.  It was fought from September – December, 1944.  It was the longest battle in American History.  Although it resulted in 33,000 casualties, it has been completely overshadowed by the more glamorous Battle of the Bulge. However, it makes no attempt to instruct about the battle. In truth, the film could be about any WWII battle where the general decides to use frontal tactics to bludgeon his way to an objective.  In some ways, it reflects the “American way of war” as enacted by incompetent, uncreative leaders.  Not every American Army commander was George Patton.  Some were Courtney Hodges.  Hodges determined that the Hurtgen had to be taken at all costs to pin down German forces and to avoid a salient threatening his drive into Germany.  Any basic understanding of the principles of war would have called for by-passing the hellish terrain.  Any foot soldier (Manning) could see the tactics were futile.  The Germans could hardly believe anyone would launch an offensive through terrain that they had incorporated into the Siegfried Line and which was so densely forested that they could not even consider it for threatening the American drive on Germany.  The movie does a fair job of replicating the terrain, but the Hungarian locale is not quite as dense and creepy as the real deal.  With its low budget, it attempts to recreate the dragon’s teeth, but its low scale.  It is more realistic in the mud and grime department.  It also does a fair job with the tree bursts and mines.  I could find no evidence that what the characters in the movie went through was based on any particular part of the battle.  Their experiences were generic, but Hollywood enhanced.  Enhanced to the point where the movie is among the most anti-war films ever made.  What better battle to advance the theme that war is Hell?


In 1998, three significant war movies came out that were set in WWII.  “Saving Private Ryan” used the talents of Steven Spielberg to take war movie entertainment into the 21st Century.  “The Thin Red Line” brought  an environmental and philosophical approach to war plotting.  And “Where Trumpets Fade” helped develop the anti-hero, anti-cliché, truly anti-war film.  One of the trio is in the Greatest 100 and does not belong and one is unheralded and does belong among the best war movies ever made.  Guess which.

grade =  A
the opening
Sabotan's "Unbreakable"
Posted by War Movie Buff at 3:06 PM