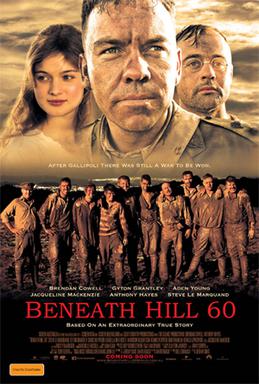 Australia has provided war movie lovers with some good movies.  “The Odd Angry Shot” (1979), “Breaker Morant” (1980), “Gallipoli” (1981), “The Lighthorsemen” (1987), and “Kokoda” (2006) are some.  “Beneath Hill 60” is a recent addition to the subgenre.  It was directed by Jeremy Sims.  He was tabbed because of his reputation for filming claustrophobic scenes.  Because of budget constraints, the tunnels were sets constructed indoors.  One set was provided by Hugh Jackman.  It had been used for a trench scene in “X Men Origins: Wolverine”.  It was critically acclaimed in Australia and was nominated for many Australian Film Institute awards including Best  Picture and Best Actor.  The story is based on the diaries of Capt. Oliver Woodward.  It was suggested by a mining engineer and historian.

The movie is set on the Western Front in 1916.  The war is at a stalemate.  The 1st Australian Tunneling Company is digging a tunnel in the area of Armentieres.  The men are whispering for fear of countermining.  A stethoscope is used to listen for the Germans.  A canary will warn of any poisonous gas.  A Lt. Woodward (Brendan Cowell) arrives to take command.  Through flashback we learn that he was a mining engineer in Australia when the war broke out.  He woos a lass named Marjorie, but her father is cool to this because Woodward has been receiving numerous white feathers.  His job is important to the war effort, but that matters little to his overly patriotic peers.  Problem solved when the British create the tunneling company and commission him to lead it.

An early scene depicts the claustrophobic suspenseful nature of mining in warfare.  Two Australians work below the earth when Germans suddenly break through.  There is an intense fight which is heightened by the dousing of the light.  The screen goes blank for a while.  An explosion causes a cave-in.  This is serious business.  Now that the fact has been established we can get on with the story.

A stereotypical WWI general shows up from his chateau and demands that Woodward’s unit eliminate a German machine gun position called the Red House.  But not by tunnel, instead by crossing no man’s land and packing explosives under the position.   Huge explosion aimed at the American audience.  After this bit of above ground activity, the unit is transferred to the Messines Ridge region.  Their assignment is to tunnel under Hill 60 and lay a huge amount of explosives.  The ensuing eruption will signal the beginning of the battle to take the ridge.  The mining features cat and mouse activities with the suspicious Germans.  When it is suggested to the German general that the front line troops be moved back one hundred yards in anticipation of a mine, he responds that they will concede no ground.   The tunneling is made more difficult by water seeping into the tunnel.  Christ, aren’t there enough man made problems?  It is not a smooth path to the explosion-packed climax.

“Beneath Hill 60” is well acted, especially by Cowell.  He has a lot of charisma, but underplays the role.  He makes Woodward a likeable character who has to make some tough decisions as good leaders are wont to do.  The supporting cast is fine and there is some nice character development.  The deaths of some are powerful, yet not melodramatic.  The dialogue holds up and the soldiers talk realistically.  (Being an Australian movie, it could have used some subtitles.)  The cinematography is excellent at depicting the claustrophobic nature of this kind of warfare.  The movie does a fine job showing the wet, rainy, muddy, grimy aspect of the war in the trenches and beneath the trenches.

The film makes effective use of flashbacks.  The scenes from Woodward’s past are brightly lit and pristine to offer a contrast to the trench scenes.  The flashbacks blend in well and are touching.  The movie also does a good job giving a German perspective.  Some sympathy is engendered.

As far as accuracy, the movie acquits itself well.  Woodward was a metallurgist and mine manager.  He did join the newly created 1st Australian Tunnelling Company after staying put in Australia due to the importance of his mining job.  The Australian tunneling units were copies of the Royal Engineer units.  They consisted of five officers and 269 sappers.  By the end of the war, there were thirty companies including from Canada and New Zealand.  The 1st Australian Tunneling Company first saw action when it replaced a British unit that tunneled under German lines in the Ypres Salient.  This is where the movie opens.  The movie does not stick around for the blowing of the mines which was the largest explosion up to that time on the Western Front.  The resulting Hooge Crater was captured by the British, but subsequently changed hands several times with the Germans using mines against it.  When the Australian unit was transferred to Hill 60 on the  Messines Ridge.  Hill 60 was the highest point on the ridge and was used for artillery observation.   The mines had already been constructed and armed by Canadians.  The digging is not shown in the movie which is a shame because it was remarkable.  It was done by miners called “clay kickers” because they used steel spades attached to their feet to dislodge the clay which was then removed by a man following him!  Oxygen depletion was a problem only partially solved by a bellows system similar to that used in “The Great Escape”.   The Australians maintained the mines and conducted activities to discourage German countermining.  This is well depicted in the movie.  This “War Underground” featured shooting, knifing, grenading, and even strangling.  Woodward was assigned the job of setting off the explosions.  Woodward set off possibly the largest non-nuclear explosion in history.  There were a total of 19 craters created.  10,000 Germans were killed. The attack that the mines launched was successful in capturing Hill 60, but now the British were exposed in a salient that the Germans rained artillery fire on and launched numerous counterattacks against.  An incredible four Victoria Crosses were awarded to defenders.  As the movie’s post script says, the hill was retaken by the Huns in 1918.  For those wanting a happy ending,  Woodward married Marjorie when he returned.  He went on to a very successful career in the mining industry.
This is the best movie on mining in WWI.  Of course, it is the only one, but that fact makes it special.  I have a soft spot for movies that bring to light little known people, events, and units from military history.  “Beneath Hill 60” is of this type.  WWI is getting a renewal of interest as we celebrate its hundredth anniversary, but few are familiar with the role tunneling played in the war.  This movie does homage to those brave miners on both sides.  I would question their sanity except that it was an insane war and most of them were using their pre-war skills in service to their countries.