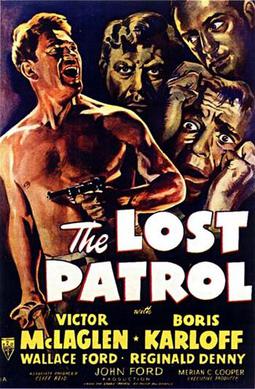 PLOT:   “Sergeant York” is a biopic about the most decorated doughboy of WWI.  It introduces Alvin York as a hell-raising hillbilly who is a disappointment for his God-fearing mama.  The first part of the film covers York’s evolution from ne’er do well to born again Christian doing his best to win the heart and hand of his country sweetheart.  U.S. entry into WWI results in York being drafted.  At first he refuses to fight because thou shalt not kill, but thankfully for the audience he is convinced otherwise.  The last of the film reenacts his famous Medal of Honor exploit.  The plot is traditional.  York overcomes obstacles with the help of others.  Much of it is hokey by modern standards.  It is overtly religious.  GRADE  -  B

“The Lost Patrol” is also Old School.  It set the template for the subgenre of lost unit movies.  In this case, a British squad is cut-off at an oasis in the Sahara.  It also created some clichés like never climb a tree in a war movie.  The men are being picked off by an unseen enemy so it fits the “who will survive?” style.  It also is a small unit dynamics movie as the group of men has a variety of personalities.  Although the movie set standards for future war movies, the plot has not held up over the years.  There is a lack of reality to much of what happens and the supposedly seasoned soldiers make some stupid mistakes that perceptive viewers will find aggravating.  GRADE  -  C

ACTING:   “Sgt. York” is anchored by superstar Gary Cooper who won Best Actor Oscar for his performance.  He does a great job even if his age is distracting.  The rest of the cast has some recognizable faces like Walter Brenner as the local pastor.  He garnered an Academy Award nomination, as did Margaret Wycherly as York’s mammy.  The movie is basically stock characters played by stock actors.  There’s no scene-chewing, but there is an oversincerity.  GRADE  -  C

“The Lost Patrol” is an ensemble piece with Victor McLaglen at the center.  He and several other cast members were WWI veterans.  McLaglen is particularly good as the crusty sergeant and most of the rest are fine, but the overall rating is brought down by a grating performance by Boris Karloff as the religious fanatic in the unit.    GRADE  -  C

COMBAT:  “Sgt. York” being a biopic, does not have much combat in it.  In fact, there is only one scene.  It’s a two parter with first a standard attack across no man’s land featuring some of the most laughable deaths in any war movie.  I have shown the assault in class so it is instructive, but not in the upper tier of WWI combat scenes.   This dynamic scene is followed by York’s individual action.  For some reason, this reenactment comes off inferior to the actual way the event played out.  GRADE  -  D

“The Lost Patrol” is not really meant to be a combat film.  The fighting consists of occasional sniping and the enemy is seldom seen.  What little action there is is painfully unrealistic.  Most of the men die because of a lack of common sense in securing their position.  The movie implies that the men are doomed, but that is only because of incompetence and due to the plot demanding it.  GRADE  -  F

ANTI-WAR:  “Sgt. York” is one of the few WWI movies that was actively pro-war.  It came out in 1941 and had a purpose of preparing the American public for involvement in the Second World War.  The last thing the producers wanted was for audiences to leave the theater horrified by the idea of another world war.  York goes from conscientious objector to patriotic warrior and becomes a celebrity.  The only sop to “war is Hell” is the death of one of York’s friends.  GRADE  -  F

“The Lost Patrol” is more anti-getting surrounded than it is anti-war.  It does feature likeable men (not counting Karloff’s Sanders).  Hell, Alan Hale gets killed!  There is little of the cynicism you get in lost patrol movies.  No one questions command decisions.  The cavalry arrives in the end.  GRADE  -  C

MATCH ANALYSIS:  So this pillow fight ends up in a tie.  No one wanted to win.  These are two overrated war movies, in my opinion.  “Sgt. York” is so much of its time that it has a lot of fans due to nostalgia.  It is firmly Old School.  It is as good as you could expect for when it was made.  It is effective in lionizing an authentic American hero and the audience ate it up with none of the groans that it would elicit in a theater today.  “The Lost Patrol” deserves credit for helping create an entire subgenre, but it seems quaint today.  It also established some clichés that we have had to deal with ever since then.  I recognize its importance, but it just is not a good movie.  Neither movie deserves to move on.  However, we have to have a winner and I am going to give it to “Sgt. York” because in a tournament to determine the best combat movie, it has a combat scene in it that is fairly good.
Posted by War Movie Buff at 7:47 PM