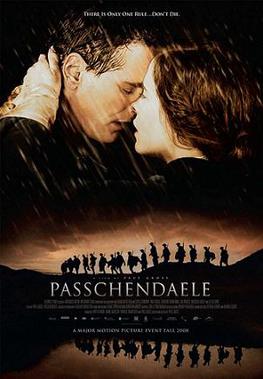 PLOT:    “Paths of Glory” is a court room (court-martial) drama set on the Western Front in 1916.  Although a fictional tale, it realistically portrays the state of the French army at the time and the incompetent and merciless leadership of the high command.  A French unit is forced to make a suicidal attack by a general seeking a promotion.  When the attack predictably fails, he insists on putting three random soldiers on trial for cowardice.  Their humane commanding officer defends them in the trial.  The plot is outstanding.  Although mainly concentrating on the trial, it does manage to set the scenario up with one of the great combat scenes as the unit makes its futile assault across a very realistic no man’s land.  Never have the machinations of WWI commanders been portrayed as perceptively.  GRADE  -  A+

“Passchendaele” is a romance set in WWI.  A Canadian soldier performs heroically on the Western Front, but his post traumatic stress disorder lands him back in Canada on recruitment duty.  He falls in love with a nurse.  In a parallel plot line, her brother is attempting to get himself sent to the front partly to win the hand of a local girl.  When he succeeds, the hero goes back to watch over him.  The nurse also ends up near the front lines.  “Passchendaele” is obviously not a true story as it bends itself into a pretzel to facilitate the plot arc.  It is very unrealistic, but does feature a balls to the wall combat scene at the end.   GRADE  -  C+

ACTING:  “Paths of Glory” has no weak performances.   Douglas is his usual charismatic self, even more so because he was passionate about the project.  His Dax is one of the great anti-authority figures in war movie history and ahead of his time in the genre.  He runs the gamut of that stereotype.  Sarcasm, slow-burns, seething, and finally snapping.  The supporting cast is not intimidated.  MacReady and Menjou are all-time slimy.  Two great villains in one movie.  Morris (who was a highly decorated ace in WWII) creates one of the great cowards in war movie history.  Ralph Meeker does his best work in an underrated career.  The most fascinating character is Ferol.  The eccentric Carey plays him to the hilt and his scene stealing aggravated the rest of the cast.   GRADE  -  A+

“Passchendaele” was written, directed, and starred in by Paul Gross.  Gross made a name for himself in the cult show “Due North” and brings some charisma to the role.  He’s no Kirk Douglas, but he is not bad.  The rest of the cast is far from stellar.  Credit is due for keeping a straight face through some of the ludicrous aspects of the plot.  Although the movie was the most expensive Canadian production up to that time, it does not show in the acting.
GRADE  -  C+

COMBAT:  “Paths of Glory” is not a combat movie.  It only has about seven minutes of combat.  However, it uses two combat scenes to set up the court-martial.  The first is a night raid that is short on action, but is crucial for character development.  The highlight of the movie is the iconic assault through no man’s land.  Stanley Kubrick is at his best in this fabulous scene.  The bombardment effects are noisily realistic.  The camera tracks Dax as he leads his men through the shell-cratered landscape.  It is probably the most authentic rendering of the doomed assaults associated with the war.  I show it every year in class to prepare my students for their trench letter assignment.  Watching the scene leaves no doubt as to why the French army would face a mutiny problem.  GRADE  -  A

“Passchendaele” seems to have realized that it needed to compensate for its lame romance with some high octane action.  It has a total of 21 minutes of combat which puts it among the leaders in that category of quantity.   Surprisingly, the quality is not bad.  The final battle goes on for fifteen minutes and is graphic if cartoonish.  It is in the style of “Saving Private Ryan”.  There is even a bout of hand-to-hand with any weapons available.  You won’t be eating your popcorn during this scene.  It is far from realistic, but entertaining for the guys who brought their chicks to see a romance.  Hell, the Germans charge into no man’s land to meet the Canadians!  The movie is really strong on artillery fire, but so are most WWI movies.  GRADE  -  B

ANTI-WAR:  Have you seen “Paths of Glory”?  If so, you know where this is going.  Some WWI movies are famous for the Nazis banning them.  “Paths” was not banned in France, but the French government discouraged its debut there for two decades. It is easy to see why.  The movie is an indictment of the French brass that crassly sent thousands to their deaths while sipping claret in their chateaus.  The movie is more anti-command than anti-war.  No major character dies in combat.  It is the best movie ever made to show how the war was made horrific not only by the use of modern weaponry, but this was compounded by incompetent, uncaring generals who refused to adjust tactics to the realities of trench warfare.  GRADE  -  A+

“Passchedaele” is not the first WWI movie that comes to mind when you think of war criticism.  However, it actually is not just a feel-blood kind of movie.  The main character is cynical and only fights for love of Sarah.  The movie makes a point of showing the naivete of the new recruits and the recruiting head is a main villain.  The pressure to join the adventure is a theme.  The ending is heart-tugging.  GRADE  -  A

MATCH ANALYSIS:  Everyone saw this outcome from a mile away.  “Paths” will be a strong contender for the championship and is one of the all-time great war movies.  “Passchendaele” is a relatively unknown movie that had no pretensions to grandeur.  I’m sure it was just happy to make the tournament.  It put up a decent fight, but never stood a chance.
Posted by War Movie Buff at 7:14 AM