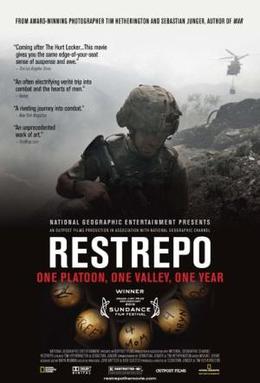 “Restrepo” is the movie companion to the acclaimed best seller “War” by Sebastian Junger. Junger was a reporter who embedded with an infantry platoon in Afghanistan in 2007-8 to get an eyewitness look at the fighting. What came out of his experience is a grunts-eye view of the war that takes the viewer into a very foreign world where American boys are fighting a forgotten war. If you feel guilty about having forgotten about their sacrifices or if you want to know what is going on over there, you should watch this outstanding documentary.


The movie is seen through the eyes of the cameramen (Junger and Tim Hetherington) who lived with the soldiers interspersed with frequent interviews with the troops after they got back. The men belong to the Second Platoon, Battle Company, 2nd Battalion, 503rd Infantry Regiment which was sent to the most dangerous place in Afghanistan – the Korengal Valley. They were deployed for 15 months and three of them did not come back including Juan “Doc” Restrepo. Their mission was to provide security for a road-building project that would benefit the obviously ungrateful residents. But based on the book and film, it is apparent their mission was to deprive the Taliban of control of the valley and kill as many of them in the process as possible.

The movie is intense and personal. You have to admire the cameraman who was right there with the soldiers when they were taking fire. In fact, early in the movie we get an inside the Humvee view of what it is like to be blown up by an IED. Most of the action takes place at an outpost named after their beloved medic Restrepo. The commander named Kearny comes off as an intelligent officer who is trying to rectify mistakes made by the previous leadership which now make it harder to win “hearts and minds”. His decision to establish Outpost Restrepo turns the tide in the valley. (In a postscript, it is revealed that after all the effort in the area, the Army abandoned the valley. See “Hamburger Hill”.)

Here are some of the things you will learn: 1. Afghanistan is a beautiful country with some truly ugly men. 2. The volunteer army concept is working. These boys are much more motivated than Vietnam War soldiers filmed under similar circumstances in 1969 would have been. 3. One of our main tactics is to make contact by drawing enemy fire. Sucks to be the guy who draws the fire. 4. If you want Americans to expend one thousand rounds, fire a few shots into their compound. 5. Life in an outpost can be so boring that you look forward to fire-fights. One soldier described fire-fights as like crack. 6. We are spending billions of dollars in Afghanistan, but we won’t pay for a farmer’s cow that “wandered into the barbed wire” and became steak. 7. Soldiers in Afghanistan do not curse as much as I thought. 8. This country and our army are not prepared mentally for losses comparable to Vietnam, much less WWII. The platoon lost “only” three men in 15 months, but because of the bonding, the deaths were gut-wrenching. 9. Being reasonable with Afghani elders is probably not going to work. 10. It is possible to make a realistic, informative movie about the war in Afghanistan without taking a political stand.